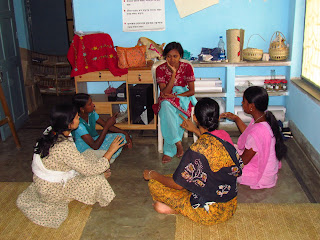 The Gender Empowerment group end their four week workshop with visiting actress-activist, Morgan Rowe tomorrow. These adolescent girls from the AHIMSA villages are training to be teachersof the "Home Schools". Morgan has been exploring the story of "Chitrangada- the warrior princess, so infatuated with Arjuna that she is prepared to hide her own personality and take on one more  'feminine' and alluring.  The girls- who come from a variety of social and economic backgrounds and ethnicities were encouraged to re-examine their own views on marriage, social expectations, identities and act out scenes from both the dance drama as well as skits based on their own writing.
2011 is the 150th year of the birth of Rabindranath Tagore- who was the creator of "Chitrangada' and who was instrumental in giving women a vital position in society through the meduim of popular literature.  It seems fitting that the "Gender group"  seems to be fulfilling one of the deepest wishes of Tagore who wanted to bring about a genuine sharing of experiences and learning between East and West.
Posted by Chandana at 19:47 No comments: 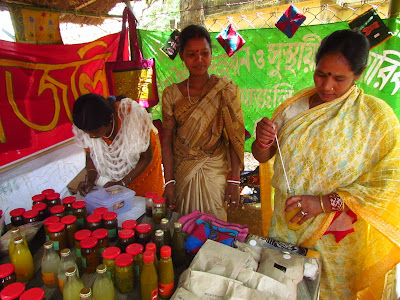 This weekend was a grand success.  Ajoli sold R.s. 1,666 worth of pickles and juices and other delicious wares under the shade of a temporary bamboo and straw stall in the heart of Santiniketan!
Posted by Chandana at 23:18 No comments: